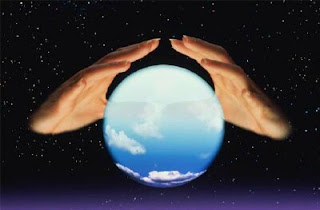 Some amazing predictions were made by a Mayan article written in 2004 that is worth mentioning:

"In the Fifth NIGHT, (November 18 2007 – November 12, 2008, ruled by the energy of Tezcatlipoca, the god of darkness), we will see the last desperate attempts of the West, and power hierarchies based on materialism everywhere, to remain in control and strengthen their power in some new very oppressive way. If the international monetary system collapses in DAY 5 we may for instance come to see this replaced by a centralized electronic control over everyone’s economic interactions (Not to mention control of whereabouts and other things). "

"Following the Fifth NIGHT large groups of people will however in the Sixth DAY break away from hierarchical control and guided by their intuition find a path towards increased wholeness. This is when the hierarchies will really start to break down, probably largely in a chaotic way. Yet, this is exactly the kind of chaos that is needed for the recreation of an Enlightened world." "The paradox to understand is that the very process that seems to break down the world economy and political dominance is also the one that paves the way for Enlightenment." "Enlightenment completes by 2011"

There is also Dr Ravi Batra's Economic predictions that has been 80-90% accurate and the following is worth mentioning, he predicted back in 1999:


"Soon after the stock market crash, a democratic revolution at the ballot box will catapult the United States into a golden age that will eclipse the reign of wealth in politics, establish a truly free enterprise economy, end permissiveness, and bring now discarded spiritual values back into fashion. Then will dawn a brilliant day, quickly sweeping across the world, the beginning of a thousand years of righteousness, compassion, and innate goodness on earth. The darker moments in human history will finally succumb to the nobility inherent in each and every one of us. It could take another thirty-year cycle before the new age sprouts in its all-encompassing effulgence, but come it will."

In his latest book, "The New Golden Age" that appeared in January 2007, Dr. Batra predicted:

* Oil price will break new record until 2010 in spite of a slowing economy, but collapse in the next decade.

* The housing bubble will keep bursting at least till 2009.

* An unprecedented movement will appear by 2009 to start a revolution against the rule of wealthy lobbyists in politics. The revolution will lead to a new golden age in the next decade.

This all agrees with the late Maharishi Mahesh Yogi who predicted that a Golden new Age is dawning for mankind in the coming generation, Heaven on Earth will be lived by everyone.

CITs are working well, there is one more at 3pm. If a High, we should sell off into the close and vice versa.

Note: If you have a hidden email address, we will be unable to respond to any requests.

Posted by Raj Time and Cycles at 1:40 PM No comments:

Eversince the 10/11/07 SPX All Time High, we have been in a perfect Down Channel (Click on chart to enlarge). Yesterday we touched lower support of this channel at 1133 SPX and in less than 24 hours, on the very last day of Option Expiration, we are up 120 SP's!

Today, 9/19/08 is Option Expiration Day and all September Options expire in the first hour today and close to the
"Maximum Pain" price, that is the price, where most Options will expire worthless, which of course is to the benefit of the "Big Boys", who underwrite these Options.

Manipulation during Option Expiration?, You Bet! and this time with the Fed's direct Help, publicly bailing out and providing hundreds of Billion of dollars to save the current financial crisis that was caused by the wealthy Risk takers (aka Gamblers) in the first place in our not so free Capitalistic System. They were once again "saved by the Option Expiration Bell". Derivatives is a Trillion Dollar Market, so there is alot at stake.

Just look at the last 2 Major Lows in the Stockmarkets, they arrived, you guessed it, during Option Expiration week!:

Will this outright Manipulation continue? Yes of course, unless something drastically changes, it has always been like that.


Note: If you have a hidden email address, we will be unable to respond to any requests.

Posted by Raj Time and Cycles at 7:31 AM No comments:

In my last post, the Series of Cycles was looking for a 9/2 Major High and T&C Members were alerted to this:

That is exactly what we got (click on chart to enlarge), the actual Intraday Low arrived 2 trading hours later on 9/5 @ 11.25 am intraday Lows, close enough.


We should now get some choppy markets into Option Expiration week.

Note: If you have a hidden email address, we will be unable to respond to any requests.

Posted by Raj Time and Cycles at 1:43 PM No comments:

The amazing Series of Cycles has been repeating in the markets for many years now. Sometimes the series fades, but after a month or so, it shows up again and then the Cycle provides very accurate turning dates.

Posted by Raj Time and Cycles at 10:25 AM No comments: